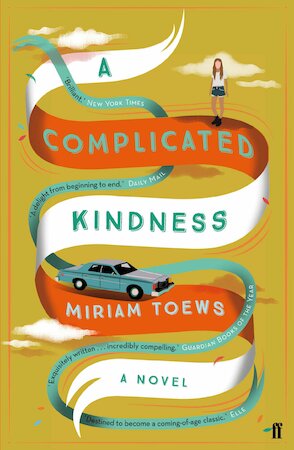 Sixteen-year-old Nomi Nickel longs to hang out with Lou Reed and Marianne Faithfull in New York City's East Village. Instead she's trapped in East Village, Manitoba, a small town whose population is Mennonite: the most embarrassing sub-sect of people to belong to if you're a teenager. East Village is a town with no train and no bar whose job prospects consist of slaughtering chickens at the Happy Family Farms abattoir or churning butter for tourists at the pioneer village. Ministered with an iron fist by Nomi's uncle Hans, a.k.a. The Mouth of Darkness, East Village is a town that's tall on rules and short on fun: no dancing, drinking, rock 'n' roll, recreational sex, swimming, make-up, jewellery, playing pool, going to cities or staying up past nine o'clock. As the novel begins, Nomi struggles to cope with the back-to-back departures three years earlier of Tash, her beautiful and mouthy sister, and Trudie, her warm and spirited mother. She lives with her father, Ray, a sweet yet hapless schoolteacher whose love is unconditional but whose parenting skills amount to benign neglect. Father and daughter deal with their losses in very different ways. Ray, a committed elder of the church, seeks to create an artificial sense of order by reorganizing the city dump late at night. Nomi, on the other hand, favours chaos as she tries to blunt her pain through drugs and imagination. Together they live in a limbo of unanswered questions. Nomi's first person narrative shifts effortlessly between the present and the past. Within the present, Nomi goes through the motions of finishing high school while flagrantly rebelling against Mennonite tradition. She hangs out on Suicide Hill, hooks upwith a boy named Travis, goes on the Pill, wanders around town, skips class and cranks Led Zeppelin. But the past is never far from her mind as she remembers happy times with her mother and sister -- as well as the painful events that led them to flee town. Throughout, in a voice both defiant and vulnerable, she offers hilarious and heartbreaking reflections on life, death, family, faith and love. Eventually Nomi's grief -- and a growing sense of hypocrisy -- cause her to spiral ever downward to a climax that seems at once startling and inevitable. But even when one more loss is heaped on her piles of losses, Nomi maintains hope and finds the imagination and willingness to envision what lies beyond. Few novels in recent years have generated as much excitement as A Complicated Kindness. Winner of the Governor General's Award and a Giller Prize Finalist, Miriam Toews's third novel has earned both critical acclaim and a long and steady position on our national bestseller lists. In the Globe and Mail, author Bill Richardson writes the following: There is so much that's accomplished and fine. The momentum of the narrative, the quality of the storytelling, the startling images, the brilliant rendering of a time and place, the observant, cataloguing eye of the writer, her great grace. But if I had to name Miriam Toews's crowning achievement, it would be the creation of Nomi Nickel, who deserves to take her place beside Daisy Goodwill Flett, Pi Patel and Hagar Shipley as a brilliantly realized character for whom the reader comes to care, okay, comes to love. This town is so severe. And silent. It makes me crazy, the silence. I wonder if a person can die from it. The town officebuilding has a giant filing cabinet full of death certificates that say choked to death on his own anger or suffocated from unexpressed feelings of unhappiness. Silentium. People here just can't wait to die, it seems. It's the main event. The only reason we're not all snuffed at birth is because that would reduce our suffering by a lifetime. My guidance counsellor has suggested to me that I change my attitude about this place and learn to love it. But I do, I told her. Oh, that's rich, she said. That's rich. . . We're Mennonites. After Dukhobors who show up naked in court we are the most embar