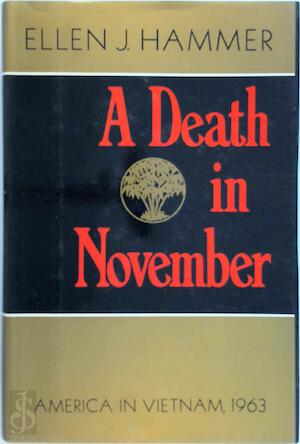 A Death in November

The time: January-November 1963. The place: Saigon. The circumstances: the subversion from inside and out of a fledgling nation, and the promotion, by some of the Kennedy administration's arrogant and uncomprehending high officials, of a group of Vietnamese generals' treachery. The result: the assassination of South Vietnamese President Ngo Dinh Diem and his brother Ngo Dinh Nhu in a military coup just three weeks before the assassination of President Kennedy. Hammer's riveting in-depth chronicle of that crucial year demonstrates how this military coup transformed the Vietnam war into an American war. Having often visited the embattled nation of South Vietnam in this period and having interviewed key characters in the drama, she also draws on previously classified documents and other sources, including many unpublished ones. Portraying the Vietnamese protagonists in a Vietnamese context, Hammer cuts away layer after layer of double-talk to expose the incomprehension and mistrust between Americans and Vietnamese that destroyed Diem's independent government. A Death in November reveals how the coup, which led to the United States' open control of the war effort, set in motion an ever-widening tragedy.