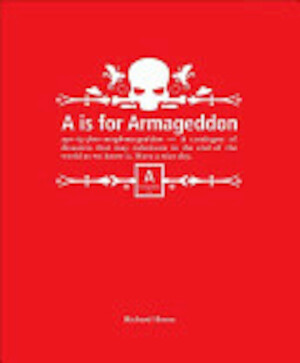 A Is for Armageddon

An extraordinary illustrated guide to the apocalypse, or, the end of the world as we know it.
Doomsday. Judgment Day. Day of Reckoning. As the man with the sandwich board says, "The end of the world is nigh!"
For as long as mankind has walked this earth, we have lived under the shadow of extinction. Whether it be from an Act of God, a natural disaster, or as the result of a man-made disaster, never before has the threat of annihilation been more pressing than right now, at the beginning of the 21st century.
A is for Armageddon is a brilliantly funny, thoroughly factual and stunningly illustrated guide to every feasible disaster scenario -- from plague, drought and famine, to animal flatulence, obesity and World War III, from economic collapse and terrorism to ozone depletion and chemical sink -- accompanied by a critical timeline for when we might expect to die -- now, soon, later, or too late. . . it's already started.
From the author of the bestselling 101 Things to Do Before You Die series, this veritable panoply of impending doom, is a catalogue of disasters that will inform and delight in equal measure. Just don't read it too close to bedtime!