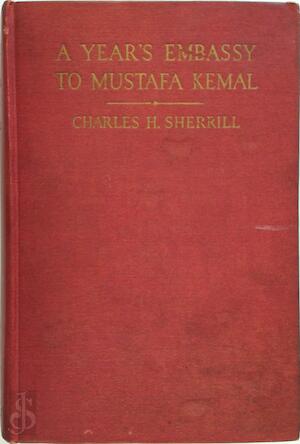 A Year's Embassy to Mustafa Kemal

Charles Hitchcock Sherrill was an American diplomat and US Ambassador to Turkey from 1932 to 1933.

Mustafa Kemal Atatürk was a Turkish army officer, revolutionary statesman, writer, and founder of the Republic of Turkey, as well as the first Turkish President. He led the Turkish national movement in the Turkish War of Independence . His military campaigns gained Turkey independence. Atatürk then embarked upon a program of political, economic, and cultural reforms, seeking to transform the former Ottoman Empire into a modern and secular nation-state. The principles of Atatürk's reforms, upon which modern Turkey was established, are referred to as Kemalism.
Book has copies of drawings by Ataturk himself as well as black and white pictures.

With message from author to Frank Presbey. Also with ex-libris