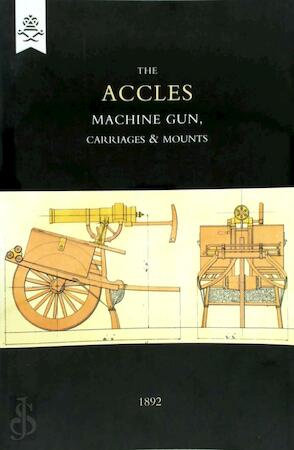 This is a sales brochure for the Accles machine gun, which was a competitor in the machine gun race of the late 19th Century when the weapon was beginning to revolutionise warfare. The Accles was an improved Gatling-type weapon, with a battery of rotating barrels. The book promotes the weapon with the aid of 4 black and white plates and 24 colour line drawings. Included are instructions for using the gun when mounted on a naval landing carriage, and a complete description of the Accles including weights and dimensions, tools and spare parts. There are also includes instructions on stripping and assembling the gun, as well as firing and clearing jams and other stoppages. This is a rare book of interest to all firearms enthusiasts. Although the Accles was not issued officially, records show that it was used on some occasions by independent business companies against pirates in the Far East.