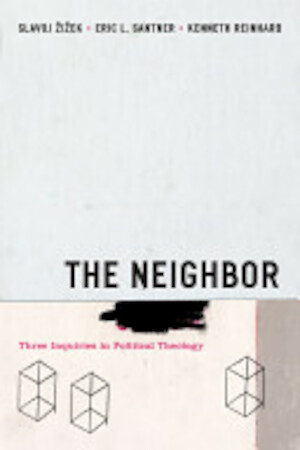 In Civilization and Its Discontents, Freud made abundantly clear what he thought about the biblical injunction, first articulated in Leviticus 19:18 and then elaborated in Christian teachings, to love one's neighbor as oneself. "Let us adopt a naive attitude towards it," he proposed, "as though we were hearing it for the first time; we shall be unable then to suppress a feeling of surprise and bewilderment." After the horrors of World War II, the Holocaust, Stalinism, and Yugoslavia, Leviticus 19:18 seems even less conceivable—but all the more urgent now—than Freud imagined.

In The Neighbor, three of the most significant intellectuals working in psychoanalysis and critical theory collaborate to show how this problem of neighbor-love opens questions that are fundamental to ethical inquiry and that suggest a new theological configuration of political theory. Their three extended essays explore today's central historical problem: the persistence of the theological in the political. In "Towards a Political Theology of the Neighbor," Kenneth Reinhard supplements Carl Schmitt's political theology of the enemy and friend with a political theology of the neighbor based in psychoanalysis. In "Miracles Happen," Eric L. Santner extends the book's exploration of neighbor-love through a bracing reassessment of Benjamin and Rosenzweig. And in an impassioned plea for ethical violence, Slavoj Žižek's "Neighbors and Other Monsters" reconsiders the idea of excess to rehabilitate a positive sense of the inhuman and challenge the influence of Levinas on contemporary ethical thought.

A rich and suggestive account of the interplay between love and hate, self and other, personal and political, The Neighbor will prove to be a touchstone across the humanities and a crucial text for understanding the persistence of political theology in secular modernity.