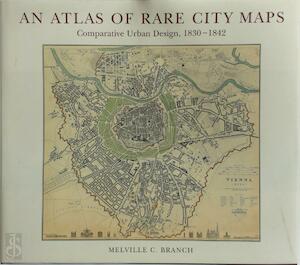 An Atlas of Rare City Maps

The map plans in this collection, covering 40 cities in Europe, Russia, the United States and Asia, were first published in the mid-19th century. The maps were all commissioned and drawn within a period of 13 years, and can be considered as artistic works in their own right. The hand-coloured, hand lettered steel engravings represent an era of exceptional artisanal skill, and present an opportunity to compare urban development among 40 cities in 19 countries. They are reproduced here in large format. The cities include Amsterdam, London, Madrid, Moscow, New York and Venice, as well as smaller cities such as Calcutta, Edinburgh, Hamburg, Lisbon, Marseilles, Parma and Stockholm. An introductory essay by Melville C. Branch discusses the historical evolution of urban design, and provides a background on engraving techniques. He also evaluates each map-plan, remarking on the details of each engraving and the evolution of the forms of the cities, their histories, and demographic characteristics.