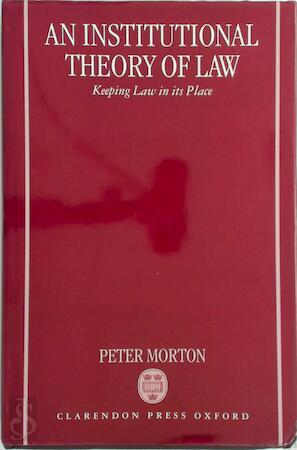 An Institutional Theory of Law

Modern law is to be understood as comprising norms which are implicated in particular forms of life which -- animated by the modern values of individualism -- have emerged in democratic polities. Failure to understand the nature of such fundamental institutional forms as 'society' and 'state',and of the need to appraise the central institutions of the democractic polity against the demands of legitimacy, has had serious consequences for political and legal theory in recent times. In An Institutional Theory of Law, Morton provides a fundamental philosophical critique of the assumptions ofpositivist jurisprudence and an attack on the foundationalism of contemporary legal philosophy. His prime concern is to distinguish between the different fields of law -- penal, civil, and public -- taking as his starting point the careful analysis of the institutions in a democracy within whichlegal language and norms are generated. Offering an original, coherent and systematic exposition of law in society today, Peter Morton sheds new, important light on legal practices and relations through comparison with an ideal type of legal system. With this book, Peter Morton offers readers a major contribution to our understanding oflaw in society in the 1990s. As such it will be of great interest to scholars of legal theory, political science, and political constitution.