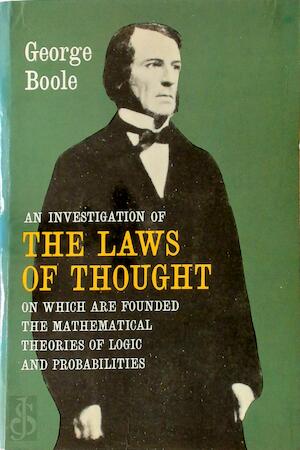 An Investigation of the Laws of Thought

On which are founded the Mathematical Theories of Logic and Probabilities

George Boole was on of the greatest mathematicians of the 19th century, and one of the most influential thinkers of all time. Not only did he make important contributions to differential equations and calculus of finite differences, he also was the discoverer of invariants, and the founder of modern symbolic logic. According to Bertrand Russell, "Pure mathematics was discovered by George Boole in his work published in 1854."
This work is the first extensive statement of the modern view that mathematics is a pure deductive science that can be applied to various situations. Boole first showed how classical logic could be treated with algebraic terminology and operations, and then proceeded to a general symbolic method of logical interference; he also attempted to devise a calculus of probabilities which could be applied to situations hitherto considered beyond investigation.
The enormous range of this work can be seen from chapter headings: Nature and Design of This Work; Signs and Their Laws; Derivation of Laws; Division of Propositions; Principles of Symbolical Reasoning; Interpretation; Elimination; Reduction; Methods of Abbreviation; Conditions of a Perfect Method; Secondary Propositions; Methods in Secondary Propositions; Clarke and Spinoza; Analysis, Aristotelian Logic; Theory of Probabilities; General Method in Probabilities; Elementary Illustrations; Statistical Conditions; Problems on Causes; Probability of Judgments; Constitution of the Intellect. This last chapter, Constitution of the Intellect, is a very significant analysis of the psychology of discovery and scientific method.