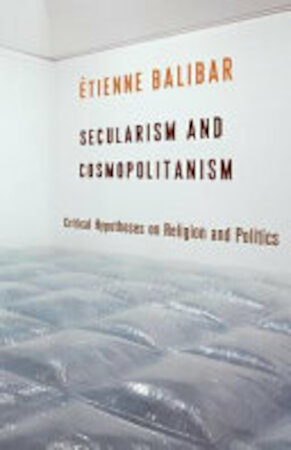 What is the relationship between cosmopolitanism and secularism--the worldwide and the worldly? While cosmopolitan politics may seem inherently secular, existing forms of secularism risk undermining the universality of cosmopolitanism because they privilege the European tradition over all others and transform particular historical norms into enunciations of truth, valid for all cultures and all epochs. In this book, the noted philosopher Étienne Balibar explores the tensions lurking at this troubled nexus in order to advance a truly democratic and emancipatory cosmopolitanism, which requires a secularization of secularism itself.

Balibar argues for the idea of the universal against its particular dominant institutions. He questions the assumptions that underlie popular ideas of secularism and religion and outlines the importance of a new critique for the contemporary world. Balibar holds that conflicts between religious and secular discourses need to be reframed from a point of view that takes into account the cultural hybridization, migration and mobility, and transformation of borders that have reshaped the postcolonial age. Among the topics discussed are the uses and misuses of the category of religion and the religious, the paradoxical genealogy of monotheism, French laïcité's identitarian turn, and the implications of the responses to the Charlie Hebdo attacks for an extended definition of free speech. Going beyond circumscribed notions of religion and the public sphere, Secularism and Cosmopolitanism is a profound rethinking of identity and difference that seeks to make room for a renewed political imagination.