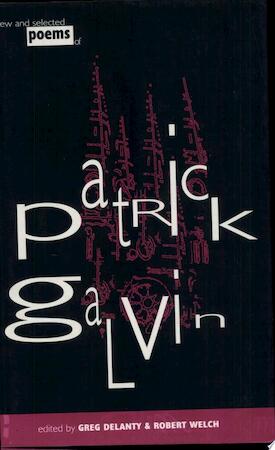 Patrick Galvin, one of Ireland most distinctive and original poets, was born in Cork in 1927. Author of seven collections of poetry his work has appeared in numerous journals and anthologies and has been broadcast by the BBC and RTE. Galvin is master of the understatement combining black humour with intense compassion to create a poetry that is directly political and humane, expressed with conviction in an effortless style of great emotional depth. His first collection of poetry Heart of Grace was published in 1957 followed by the mould-breaking Christ in London. Other collections include The Wood-Burners, Man on the Porch and Folk Tales For the General, a Poetry Ireland Book Choice. His most recent works The Mad Women of Cork and The Death of Art O'Leary were published in 1994. Robin Skelton in a review for The Guardian states that Galvin is 'one of the few really original poets of our generation'. Galvin is also a well known playwright and was Resident Dramatist at the Lyric Theatre, Belfast from 1973 to 1979. His awards include a Leverhulme Fellowship in Drama and the prestigious Irish American Cultural Award for Poetry in 1995. This single volume supports the sentiments of many critics who believe his work is a significant contribution to poetry in Ireland.