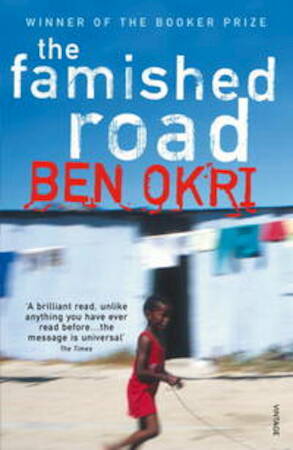 Set in an unnamed African country at an unspecified time (though the similarities with Nigeria in the early 1960s are unmistakable),The Famished Roadis narrated by Azaro, an African spirit-child or abiku who, in the folklore of southern Nigeria, is destined to move continually between life and spiritual paradise in an unending cycle of infant death and rebirth. Azaro, however, is tired of never staying long enough to experience life, and decides on this occasion to remain, "to put", he says, "a smile on my mother's face". Pursued by vengeful spirits, and endowed with special powers that lead him into mischief, Azaro introduces us to a whole world of wonders -- to his mother and father, an impoverished market trader and a load carrier struggling courageously to keep their dignity and their independence; to Madame Koto, the local bar owner whose journey from innocence to corruption mirrors the realities unfolding around her; to the politics, poverty and brutal reality of life in a shanty town in post-colonial Africa; and to Azaro's own intensely imagined visions. As political corruption becomes endemic and as old tribal traditions clash with the forces of urbanisation, the author shows us the extraordinary mix of hope and despair that characterises his community and the sheer vitality of a society where, as Okri has said, "the consequences of your actions are immediate and unavoidable". Deftly mixing mythical visions with naturalistic portrayal, the result is a book of huge scope and originality which works on many levels -- as political parable, social critique, cultural guidebook and spiritual inspiration -- but whose central triumph is its depiction of tight-knit family relations and the entrancing oddity of everyday life.