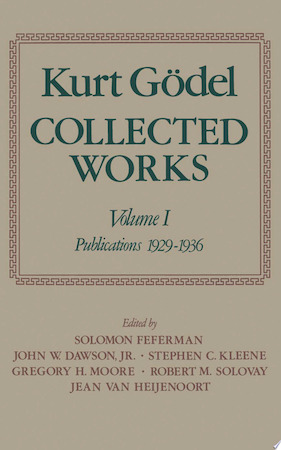 Kurt Gödel (1906 - 1978) was the most outstanding logician of the twentieth century, famous for his hallmark works on the completeness of logic, the incompleteness of number theory, and the consistency of the axiom of choice and the continuum hypothesis. He is also noted for his work on constructivity, the decision problem, and the foundations of computability theory, as well as for the strong individuality of his writings on the philosophy of mathematics. He is less well known for his discovery of unusual cosmological models for Einstein's equations, in theory permitting time travel into the past. The Collected Works is a landmark resource that draws together a lifetime of creative thought and accomplishment. The first two volumes were devoted to Gödel's publications in full (both in original and translation), and the third volume featured a wide selection of unpublished articles and lecture texts found in Gödel's Nachlass. These long-awaited final two volumes contain Gödel's correspondence of logical, philosophical, and scientific interest. Volume IV covers A to G, with H to Z in volume V; in addition, Volume V contains a full inventory of Gödel's Nachlass. L All volumes include introductory notes that provide extensive explanatory and historical commentary on each body of work, English translations of material originally written in German (some transcribed from the Gabelsberger shorthand), and a complete bibliography of all works cited. Kurt Gödel: Collected Works is designed to be useful and accessible to as wide an audience as possible without sacrificing scientific or historical accuracy. The only comprehensive edition of Gödel's work available, it will be an essential part of the working library of professionals and students in logic, mathematics, philosophy, history of science, and computer science and all others who wish to be acquainted with one of the great minds of the twentieth century.