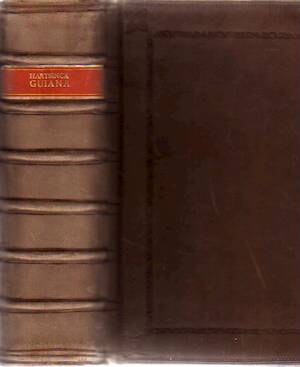 Cf. Sabin 30712; Tiele 457; Rouffaer/Muller p.621; Cat. NHSM 281 ; Van Doorne/ Van Kempen 2560. “This description of Guiana or the Wild Coast of South America, it’s geography, history, inhabitants, animals, with an account of its discovery ?)and the colonies of the Spaniards, French, Portuguese is said by Mr. Warden to be ‘by far the best work ever published on the countries described.’ Jan Jacob Hartsinck (1716-1779) was an official of the admiralty in Amsterdam and a member of the Zeeland academy of sciences; Later he became Director of the West India Company. He was a man of very high standing, who had access to all the authorities” (Sabin). He had ready access to many documents now long lost, including an account of the rebellion in Surinam (1763-1764) in which the colony had lost almost half of its black and perhaps an even larger percentage of its white population.

The book is slightly browned as usual. 2 volumes in one.