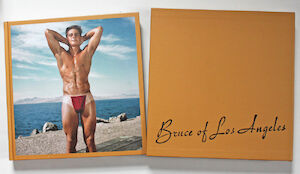 An icon of gay art and one of the most famous names in physique photography, Bruce Bellas is remembered today as a pioneer of beefcake. Beginning in the 1940s and continuing until his death in 1974, Bellas photographed some of the most important figures in the world of physical culture; bodybuilders Steve Reeves, Bob McCune, and George Eiferman, and models Joe Dallesandro, Mark Nixon, and Brian Idol are just a few of the countless strapping males captured by Bellas&; lens. The man who came to be known as Bruce of Los Angeles crafted a refined, masterful aesthetic of erotica, whose influence would later surface in the work of Robert Mapplethorpe, Herb Ritts, Bruce Weber, and many others.

Collected in Bruce of Los Angeles: Inside/Outside are Bellas&; rare photographs and films, as they have never been seen before. The two sections, ''Inside'' and ''Outside'', comprise over 100 full-color images, all masterfully restored from the original color negatives. This limited-edition set is contained in a unique slipcase, and includes a DVD of 12 digitally remastered films.