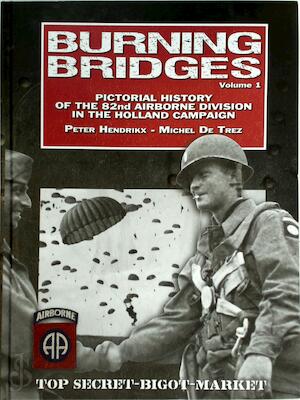 ""Burning Bridges" begins with the introduction, where the decision-making process that led to Operation Market Garden is explained in great detail. The subsequent chapters discuss the preparations in the marshalling areas in England, the activities of the Pathfinders, and the boarding of the aircraft by all paratroop regiments and battalions. The glider lifts are also well covered by many newly discovered photographs. After the entire division was airborne, "Burning Bridges" continues with the actual drops at the drop- and landing zones as well as the first two days of combat. The drop of the 504th Regiment and the capture of the Grave Bridge and the bridges over the Maas-Waal Canal are covered first. Hundreds of photographs, documents and artifacts tell the successful story of the capture of the bridges. The landings of the 505th and 508th Regiments on Drop Zones N and T in Groesbeek, east of Nijmegen are also covered. The Germans were overwhelmed and resistance was still negligible. It was the quiet before the storm."