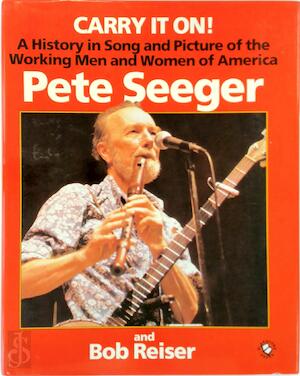 Carry It On! is a celebration in photos, words and songs of the working men and women who built America. Perhaps the best-known and best-loved folksinger of our time, Pete Seeger has now gathered from his encyclopedic knowledge of the folk music of the United States over 80 songs that, starting with the War of Independence and coming down to today, reflect the experience of the working people of America. This is a book for singing, for enjoying, for learning. It contains many old favourites, including 'John Henry,' 'Oh, Freedom!' 'Union Maid,' and We Shall Overcome,' along with less familiar songs, either from the archives or from the present day, that will soon be favourites. The rich array of pictures and illustrative material makes this piece of Americana as fascinating for the eye as for the ear. And Bob Reiser, writer and teacher at Long Island University, has added a running text that, in conjunction with the songs and illustrations, offers a fascinating history of the labour movement in America, from its beginnings in the mill towns of the 1930s to the Haymarket Riot of 1886 to the triumphant days of the 1930s and beyond. Carry It On! reflects the major role that working people have played not only in the building of America but in its cultural life as well. Here is a river of song that, starting at the very foundation of the country, has flowed ever since. No one - whether in family, school or union, as American history buff or folk song lover - will want to be without this delightful and authoritative collection.