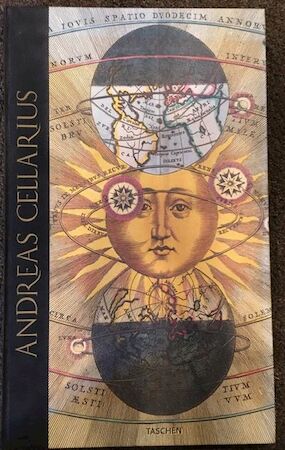 The Finest Atlas of the Heavens

Text in English, French and German.

Stargazing: History's most beautiful constellation maps in XXL-format! This collection of celestial atlases by Dutch-German mathematician and cosmographer Andreas Cellarius (c. 1596 ? 1665) brings back to life a masterpiece from the Golden Age of celestial cartography. First published in 1660 in Harmonia Macrocosmica, the complete 29 double-folio maps and dozens of unusual details reproduced here depict the world systems of Claudius Ptolemy, Nicolas Copernicus, and Tycho Brahe, the motions of the sun, the moon, and the planets, and the delineation of the constellations in various views. Cellarius's atlas, superbly embellished with richly decorated borders depicting cherubs, astronomers, and astronomical instruments, features some of the most spectacular illustration in the history of astronomy. This reprint, made from the beautifully hand-colored and complete copy of the first edition in the Library of the Universiteit van Amsterdam, includes a copiously illustrated introduction by Robert van Gent, one of the leading Cellarius experts, summarizing the history of celestial cartography from antiquity to late 17th/early 18th century and illuminating the life and work of Andreas Cellarius. Van Gent also discusses the historical and cultural context and significance of the atlas and provides detailed descriptions of the astronomical and iconographical content of the plates, allowing modern readers to fully appreciate the masterwork of Andreas Cellarius and his publisher, Johannes Janssonius. The book's detailed appendix includes a list of constellation figures with short descriptions of their origin and mythology, a list of star names found on the plates, a glossary of technical words, and abibliography. Though these beautiful maps have become famous by being depicted on postcards, calendars, portfolios, and even mouse pads, they have rarely been reproduced in book form and never with such comprehensive descriptions and details as this TASCHEN edition. Cellarius's exquisite renditions of the constellations will excite the astronomer in anyone.