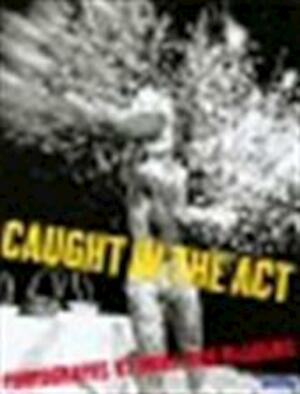 Caught in the act

a look at contemporary multimedia performance

Caught in the Act is an exhilarating look at multimedia performance with front-row-center photographs by Dona Ann McAdamns. Her unique vantage is in part due to the enormous respect she has earned from the performers, and it is her key to documenting this ground-breaking type of theater that continuallly challenges the definitions of all the arts. Caught in the Act seizes the energy of paint-squirting, media-mixing Blue Man Group drumming into oblivion, while it resounds with the passionate rants of Karen Finley, and quivers with Pat Oleszko's dazzling costumes of ever-moving appendages.Covering performance art since is nasence at the East Village's Pyramid Club, the WOW Café, 8BC, and other clubs in the early eighties McAdams became the in-house photo archivist at the infamous performance space, P.S. 122, the home of cutting-edge theater that eschews convention as it draws energy and inspiration from all media. At P.S. 122 and other alternative performance spaces such as The Kitchen and Dance Theater Workshop, McAdams developed her long-term relationships with many performers.C. Carr is a Village Voice writer and a long-recognized cultural critic of the New York underground arts movement; in her personal and insightful introduction to Caught in the Act, she writes, "The key to McAdams's work is the relationship she has with the artists. She empathizes. They trust." It is this collaborative approach that has allowed McAdams to faithfully represent the rage, courage, integrity, and creative force of such varied artists as Diamand Galás, Holly Hughes, Ishmael Houston-Jones, John Kelly, DANCENOISE, Ethyl Eichelberger, and David Wojnarowicz--and this is only a small sampling of the performers featured here.Caught in the Act celebrates the spirit that links all artists across their different disciplines and aesthetics. The wonderful coexistence of disparate sensibilities in this publication underscores the very nature of this hybrid art. At the same time, it features many artists who, while focusing primarily on a particular medium, have expanded the context for that medium and pioneered the boundlessness, the marvelous sense of possibility that so distinguishes this contemporary manifestation of performance.This sleek book of black-and-white photographs printed in duotone includes contributions of words, drawings, and scores from some of the pictured performers, including many of those listed above, as well as Penny Arcade, John Bernd, Eric Bogosian, Allen Ginsberg, Philip Glass, Meredith Monk, Tim Miller, and many others.A performance poet in the beat tradition who has been reading and performing since the early seventies, Eileen Myles also contributes a moving Afterword with her poem, "the Troubador." Taken altogether Caught in the Act is as much of the artists as it is about them. This Aperture publication is an entirely original and broad collection of work by some of the most gifted artists of our time.

Jacket has some damage along edges.