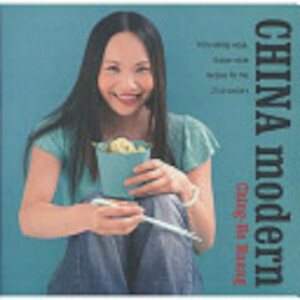 Modern Chinese food has come a long way from the traditional favourites that we order by rote from our local takeaway. As China opens up to the West as well as the rest of the East, its culinary traditions have evolved to create a new and exciting cuisine that can best be described as fusion. In China Modern, Ching-He Huang explores these new influences and challenges conventional perceptions of Chinese food. She looks at how dishes have been reinvented, drawing on inspiration from Japan, Thailand and Vietnam as well as Europe. Ching's 'Peking Duck Sushi', for example, fuses a traditional Chinese dish with classic Japanese presentation, while her 'Steamed Seabass with Stir Fried Spring Onions and Chillies' demonstrates the breadth of cooking style in regional China. Healthy eating has also become more important and cooking techniques are moving away from deep-frying to steaming, pan frying, boiling, grilling and even baking! Ching also looks at home cooking from the less well-known provinces in China such as Hunan and Sichuan (most of the food we know as Chinese originated in Hong Kong) as well as how those takeaway favourites should really be cooked.China Modern will trace an exciting culinary journey, one that Ching will show you with warmth, humour and style. This is cutting-edge Chinese at its best.