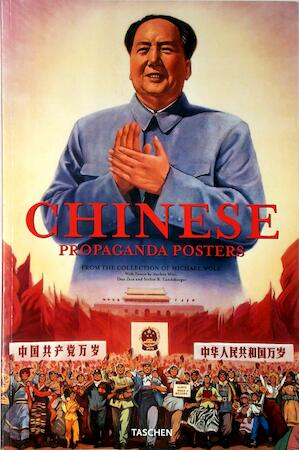 With his smooth, warm, red face which radiated light in all directions, Chairman Mao Zedong was a fixture in Chinese propaganda posters produced between the birth of the People's Republic in 1949 and the early 1980s. These infamous posters were, in turn, central fixtures in Chinese homes, railway stations, schools, journals, magazines, and just about anywhere else where people were likely to see them. Chairman Mao, portrayed as a stoic superhero (a.k.a. the Great Teacher, the Great Leader, the Great Helmsman, the Supreme Commander), appeared in all kinds of situations (inspecting factories, smoking a cigarette with peasant workers, standing by the Yangzi River in a bathrobe, presiding over the bow of a ship, or floating over a sea of red flags), flanked by strong, healthy, ageless men and "masculinized" women and children wearing baggy, sexless, drab clothing.