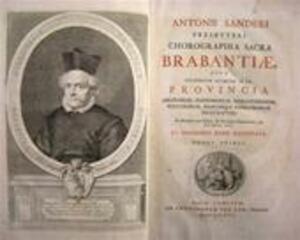 Folio. Illustrated with 65 superb plates, mostly folding double-page. The plates are large and detailed birds-eye views of monasteries, abbeys and churches. Further illustration consists of a frontispiece portrait of the author, a vignette to the title pages (by D. Coster) and an engraved vignette to the start of each of the chapters, depicting coat-of-arms of monasteries or their abbots and saints. The plates are drawn by Harrewijn, D. Coster, Berterham, R. Blokhuijse and P. de Doncker (where they are signed). Further decoration: a wood engraved tailpiece to the end of every chapter.
[Bibl. Belgica V, 64; Funck 392; Graesse VI, 262]

The second edition – 60 years after the first – of Sanderus’ masterpiece on the abbeys, churches and other places of worship and devotion in the Duchy of Brabant. This edition is known to be less complete than the first, but with a new set of plates, that are often drawn from a different perspective, thus increasing the book’s topographical value.

Three volumes uniform contemporary polished calf with 7 raised bands and gilt decorated spines, the title giltstamped to a title shield, the vol. numbering giltstamped direct. The outside hinges of volumes 1 and 3 split but attached, the hinges of volume 2 rubbed. The head and tail of volumes 2 and 3 chipped and a little worn, the corners bumped and rubbed. An armorial bookplate to the front pastedown of each volume.