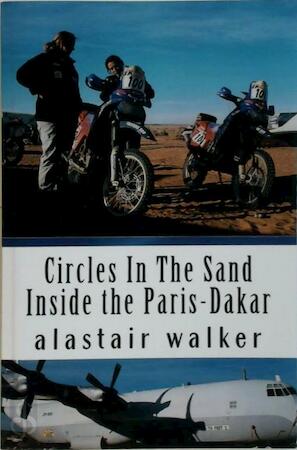 Circles In The Sand

Motorcycle journalist Alastair Walker packed his tent and joined the 2001 Paris-Dakar rally press plane. Follow his adventure as he sleeps rough on desert airstrips, goes slightly mad on anti-malaria drugs, almost freezes to death in the Atlas mountains, and argues with heavily armed men over the price of water.This is a look behind the scenes of one of the great car, truck and motorcycle races. It featured BMW vs KTM in a bitter war of attrition to the flag; crashes, dubious rule changes, landmines, thieves and gunfire in the night. The 2001 Paris-Dakar was a dangerous event, for both riders and crew.Walker takes you alongside Brit enduro racer John Deacon and offers the reader a unique insight into how this crazy circus travelled across North West Africa, as riders challenged the searing heat and dust of the Sahara.This is the Dakar as it used to be; the maddest, baddest off-road adventure on the planet.