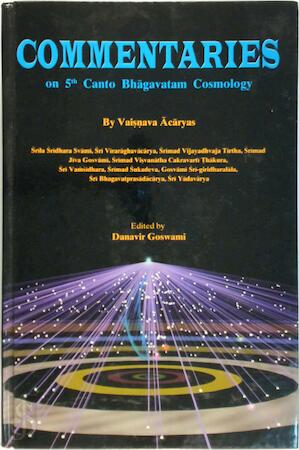 Study on the Hindu cosmology in 5th skanda of Bhāgavatapurānạ as explained in commentaries.
This Sanskrit classic was extensively referenced by His Divine Grace A.C. Bhaktivedanta Swami Prabhupada in writing his purports for the Fifth Canto of the Srimad-Bhagavatam. Now the entire compendium of commentaries [which includes those of Srila Sridhara Svami, Sri Viraraghavacarya, Srimad Vijayadhvaja Tirtha, Srila Jiva Gosvami and Srimad Visvanatha Cakravarti Thakura] is available for first time in English. The translation was done by erudite Vasnava scholars and edited by His Holiness Danavir Goswami.