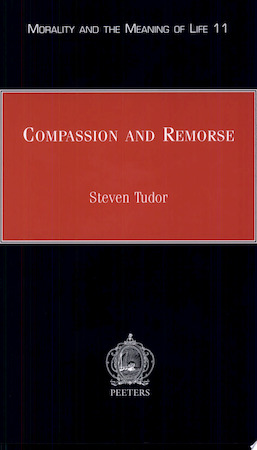 This book articulates in rich and complex ways the nature of two important moral emotions or 'ways of being' -- compassion and remorse. As an exemplar of the 'agent-centred' tradition in normative ethical theory, it is a fine piece of work, exhibiting one of the more admirable and enjoyable aspects of work in that tradition -- the ability to build bridges between a variety of philosophical traditions. Steven Tudor makes excellent use of authors in both the analytic an continental traditions, while maintaing an admirable clear style. The book elucidates in nuanced and quite sophisticated ways the various aspects of compassion and remorse, and how they are distinguishable from neighbouring and less valuable states such as pity, emphaty, guilt feelings, shame and regret. At the same time, it acknowledges and combats various criticisms of compassion and remorse as moral responses by distinguishing between distorted and undistorted forms of these states. Compassion and Remorse: Acknowledging the Suffering Other is an interesting and intelligent work of philosophy." Dr Christine Swanton, University of Auckland, New Zealand, author of Freedom: A Coherence Theory (winner of Johnsonsian Prize, 1990) "Steven Tudor's book examines two important features of moral experience, compassion and remorse, both of which deserve a central place in the contemporary revival of virtue theory. Both involve the recognition of other people's suffering, while the second also involves a personal recognition of, in some cases, responsibility for that suffering. Drawing on a number of sources -- phenomenology, theology, postmodernism, and the philosophy of Wittgenstein -- Tudor interprets these important moral responses, not as bare cognitions, but in terms of understanding, feeling and practical engagement. Following a path of clear and cogent arguments, he develops a number of moral themes so as to sketch an illuminating conception of the moral life. This is a book for the thoughtful and reflective participant in those moral debates which touch on our personal relations with, and responsibility for, each other. What it offers the reader, in the end, is a strong defence of moral universality and a common human nature." Professor Brenda Almond, University of Hull, author of Exploring Ethics: A Traveller's Tale (1998) and Vice-President of the Society for Applied Philosophy Dr Steven Tudor studied philosophy and law at the University of Melbourne, Australia, where he is currently a Senior Fellow in the Department of Philosophy. He also practises law as a barrister.