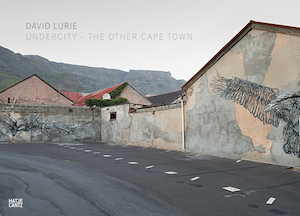 Off the beaten tourist paths below Table Mountain: Since the end of the apartheid era, Cape Town, South Africaʼs metropolis par excellence, has become a major tourist destination, offering sunny backdrops for commercials and homes for the moneyed classes. Obscene levels of unemployment and the daily struggle for survival among the impoverished are rarely visible behind this veneer. The South African photographer David Lurie unmasks the “other” Cape Town, in the early morning hours, when the city is still asleep, delicate and vulnerable. His series Morning After Dark deals with the infrastructure of public and private places and its influence on the city’s residents—from rich to poor. The second series in the book, Writing the City, considers the city’s surfaces: urban landscapes that include billboards, street signs, graffiti and street art. What are they saying? Who are they speaking to? How do they direct society, and to where? Lurie offers a highly pensive study in fascinating and original images.