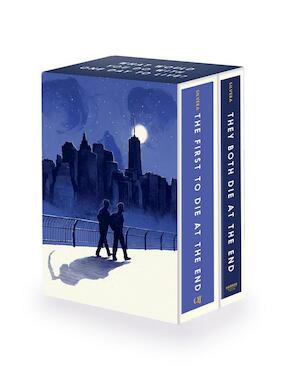 Discover They Both Die at the End, the year-long #1 New York Times bestseller, and The First to Die at the End from critically acclaimed author Adam Silvera in this hardcover box set. Just in time for holiday gifting! They Both Die at the End “Extraordinary and unforgettable.” —ALA Booklist, starred review “Adam Silvera uses his ample skill to force readers to examine how they live life now and how they want to live it.” —Teen Vogue “Gorgeous writing and wonderful storytelling will wreck you in the very best possible way.” —BuzzFeed On September 5, a little after midnight, Death-Cast calls Mateo Torrez and Rufus Emeterio to give them some bad news: They’re going to die today. Mateo and Rufus are total strangers, but, for different reasons, they’re both looking to make a new friend on their End Day. The good news: There’s an app for that. Through it, Rufus and Mateo are about to meet up for one last great adventure—to live a lifetime in a single day. The First to Die at the End Adam Silvera revisits the world of Death-Cast 7 years before the events of They Both Die at the End in this story about the lasting impact that people have on each other. It’s the night before Death-Cast goes live, and there’s one question on everyone’s mind: Can Death-Cast actually predict when someone will die, or is it just an elaborate hoax? Orion Pagan has waited years for someone to tell him that he’s going to die, but Valentino Prince only just registered for Death-Cast, prompted in part because his twin sister nearly died. When the first round of End Day calls goes out their lives are forever changed—and, through one unforgettable day together, they learn how life is always worth living to the fullest.