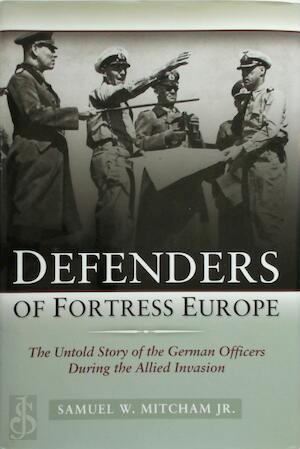 The Untold Story of the German Officers During the Allied Invasion

The year 1944 bore witness to the fifth long year of World War II. Death rained from the skies of Germany, her cities were ablaze or in rubble, the extermination camps operated with cold-blooded efficiency, and the Eastern Front’s guns roared day and night. Hardly a German family had not lost a loved one. Most terribly, the Russian Front’s floodgates creaked ominously. If they gave way, the Red Army would engulf the eastern marshlands--and perhaps the entire Fatherland--in a flood of barbarism not seen since the Dark Ages. Yet, as the Wehrmacht retreated, Germans still had hope. If the men of the Western Front could repulse the great invasion, dozens of units--including panzer divisions, SS regiments, and paratrooper formations--would arrive to thwart the Red advance. German scientists needed at least another year to develop their "wonder weapons,” such as V-2 rockets, submarines, jet airplanes, and perhaps even an atomic bomb. Everything depended on the Western Front’s warlords. Defenders of Fortress Europe introduces the men who had once believed they would conquer the world. By 1944, however, they were trying to throw the Allies back into the sea or just check them before they could reach Germany. The Fatherland’s defense was in the hands of Nazis, non-Nazis, and anti-Nazis; professional soldiers and professional troublemakers; heroes, murderers, and war criminals; the efficient geniuses and the incompetent; the famous, the infamous, and the unknown; soldiers, sailors, SS men, and air force officers--all men who fought out of fanaticism, courage, personal ambition, a sense of honor, duty, love of country, misplaced patriotism, or, simply, habit.