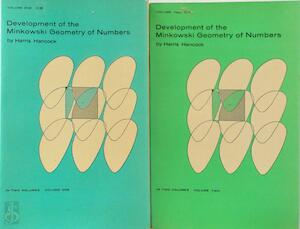 Development of the Minkowski Geometry of Numbers - 2 Volumes

The Geometry of Numbers as presented here is a sequel to my work on the "Foundations of the Theory of Algebraic Numbers." An attempt is made to broaden the bases or substructures of these subjects rather than to amplify their superstructures. By making a dilation (a term often used in the present work) of the original realm and extended realm upon these new bases is derived within which the theorems of the original realm are more readily proved; theorems hitherto unsolved are solved, while new and more comprehensive theorems may be introduced. [Hermann] Minkowski was one of the great mathematicians of all time. His grasp of geometrical concepts seem almost superhuman. Minkowski came to his theorems through spacial intuitions. Due to the limitations of a manifold in three dimensions he presented his theory in a purely analytic manner. Thus while he was able to treat manifolds of any order, the work is far more difficult of comprehension that if he had first derived his results in a two or three dimensional geometry with illustrative figures and then presented the general theory analytically with the use of such expressions that are indicative of geometric concepts. From this standpoint I have given the entire theory, which I call the "Development of the Minkowski Geometry of Numbers." By using the qualifying word "Minkowski" I am able to limit the content of this work which otherwise would be beyond bounds.