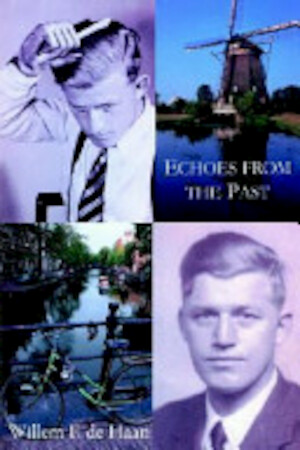 Echoes from the Past

This story was written for two reasons. Firstly, I wanted my children and grandchildren to have a story of my life. Secondly, I wanted to show to severely disabled people that with all the help available it is possible to lead a reasonable normal life providing the will and determination is there.

I was brought up in Holland in a large family with three sisters and two brothers. My father earned his living by working on the trawlers catching fish in the North Sea and around North Cape of Norway in the 1930's that was hard and dangerous.

Life changed forever when the Germans invaded Holland during the Second World War. We became an occupied country, food was short, transport almost impossible and my father was in England.

Men of all ages over 16 lived in constant fear of being transported to Germany to the slave camps, where many Dutch people died, or returned only to die of tuberculosis or starvation.

This story covers the German occupation of Holland surviving on very little food, the escapes from the German captivity, a horrifying accident that resulted in a very severe disability.

After the war, since there were no facilities for the disabled in Holland, the Red Cross arranged for me to be provided with artificial limbs in England. The time spent in Roehampton hospital was long and wearisome.

After the discharge from the hospital somehow a normal life had to be found. The kindness of an Import Export firm in London, and eventually Unilever gave me permanent employment, this leading to a fairly normal life.

The book wishes to show that in spite of all the cruelty during the war, many people helped with my recovery with great kindness and understanding, wthout them I would not have survived.