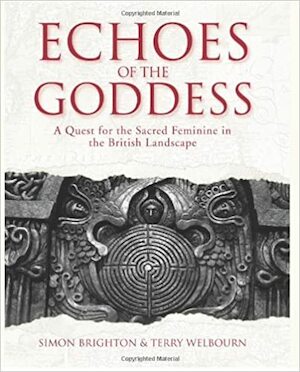 Echoes of the Goddess: a quest for the sacred feminine in the British landscape

Explore sacred sites, unearth long lost religions, and uncover the mystical side of Britain's landscape, in the search for the divine feminine. In pre-Christian Britain the Great Goddess was worshipped either as an equal to the Gods or as an individual deity. From the Palaeolithic 'Earth Mother' to the Celtic goddesses of Boadicea and the Brigantes, this land once revered the divine feminine. Over the past five years Simon Brighton and Terry Welbourn set out to discover what happened to the Goddess after she was evicted from her elevated position. Travelling throughout Britain, they have uncovered traces of the divine feminine: from holy wells and shrines, lost underground chambers to folklore, legends and fairy tales. Between them they have researched and photographed hundreds of sites. They present a case that suggests that even after centuries of marginalisation, the goddess has remained with us - she has just found new ways of asserting herself. This unique book provides a rare glimpse through the sands of time to an era before modernisation and secularisation took hold, a time when pagan ritual and nature ruled the land. The authors take us on a journey to uncover the secret clues hidden beneath our feet, as they expose the dualism of Christianity and paganism amongst many fascinating sites, ruins, churches and the very landscape itself. Perfect for anyone with an interest in British history and theology, as well as for tourists and locals who wish to uncover the real truth behind these seemingly innocuous sights.