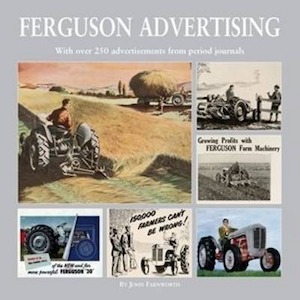 With over 250 advertisement from period journals

Harry Ferguson's contribution to agriculture was enormous. His Ferguson System took farm mechanisation a giant leap forward and was universally copied by other manufacturers. Indeed it remains a basic feature of tractor and implement design worldwide today. He was also an innovator in offering in addition to his tractor a complete range of implements designed specifically for it, from ploughs to post-hole borer, something no manufacturer had done before, and a strategy that greatly increased sales of Ferguson products. He really knew how to sell, and in addition he outdid all his competitors in the promotion and marketing of the Ferguson range. This book brings together a wide selection of Ferguson advertisements published in journals and magazines in both the UK and the USA, from the days of the Ferguson Brown tractor through the Ford Ferguson, TE20, TO20, TO30, TO35 and Ferguson FE35 to the Ferguson 40, the last of the line prior to the introduction of the Massey-Ferguson MF35. Implements and farm equipment made for Fergusons are also covered. Author John Farnworth is well known through his previous publications, and here he studies a subject that has a broad appeal to tractor enthusiasts and to the army of collectors of Ferguson memorabilia, while at the same time providing an overview of the life and times of the Ferguson brand. More than 000 advertisements are reproduced in the book.