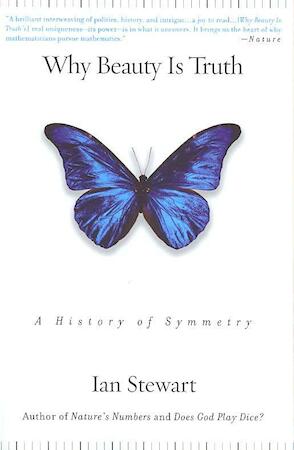 Why Beauty Is Truth

The History of Symmetry

Leading mathematician and author Ian Stewart explores a concept both simple and complex, both multi-disciplinary and unifying - symmetry. There is no more important concept in the history of mathematics and physics than symmetry. It lies at the heart of relativity theory, quantum mechanics, string theory and much of modern cosmology. In Why Beauty Is Truth , world-famous mathematician Ian Stewart narrates the history of the emergence of this remarkable area of study, from its roots in tenth-century BC Babylon to its current role in 21st century physics. Stewart introduces us to such characters as the Renaissance Italian genius, rogue, scholar, and gambler Girolamo Cardano, who stole the modern method of solving cubic equations and published it in the first important book on algebra, and the young revolutionary Evariste Galois, who refashioned the whole of mathematics and founded the field of group theory only to die in pointless duel over a woman, before his work was published. Stewart also explores the strange numerology of real mathematics, in which particular numbers have unique and unpredictable properties related to symmetry. He shows how Wilhelm Killing discovered Lie groups with 14, 52, 78, 133, and 248 dimensions - groups whose very existence is a profound puzzle. Finally, Stewart describes the world beyond superstrings: the octonionic symmetries that may explain the very existence of the universe. Weaving mathematical theory with the fascinating and often dramatic stories of the people involved, Why Beauty is Truth is a lively, readable and accessible book for casual and specialized readers alike.