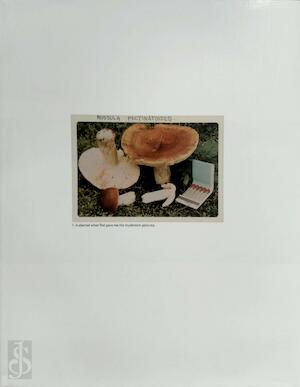 As photographer Jason Fulford recently learned firsthand, mushrooms have a way of growing and spreading wherever they touch ground. It all started when a friend of Fulford's gave him a box, found at a flea market, full of photos of mushrooms--unassuming pictures taken by an unknown but almost certainly amateur photographer, apparently as notes for some mycological studies. Fulford's art photographs--aside from his well-known book Dancing Pictures, which depicted people getting down to their favorite songs--are usually of staid, quasi-mute objects: a smashed Dorito chip overrun with ants, two bronzed doorknobs spooning, the blank back of a street sign. Yet these mushroom images got stuck in Fulford's mind, like a bad song sometimes does, and they started to grow in his own work. The Mushroom Collector combines some of the original flea-market mushroom pictures with his own images and text by the artist about the project.