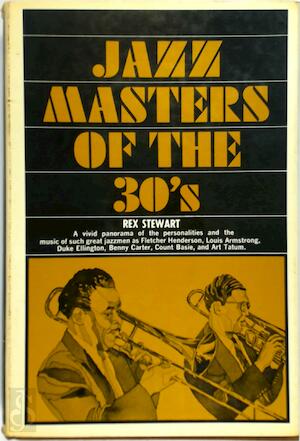 Jazz Masters Of The 30's

Rex Stewart, who played trumpet and cornet with Fletcher Henderson and Duke Ellington, knew personally all the giants of jazz in the 1930s and thus his judgments on their achievements come with unique authority and understanding. As a good friend, he never minimizes their foibles yet he writes of them with affection and generosity. Chapters on Fletcher Henderson, Coleman Hawkins, Red Norvo, Art Tatum, Big Sid Catlett, Benny Carter, and Louis Armstrong mix personal anecdotes with critical comments that only a fellow jazz musician could relate. A section on Ellington and the Ellington orchestra profiles Ben Webster, Harry Carney, Tricky Sam Nanton, Barney Bigard, and Duke himself, with whom Rex Stewart was a barber, chef, poker opponent, and third trumpet. Finally, he recounts the stories of legendary jam sessions between Jelly Roll Morton, Willie the Lion Smith, and James P. Johnson, all vying for the unofficial title of king of Harlem stride piano. It was the decade of swing and no one saw it, heard it, or wrote about it better than Rex Stewart.