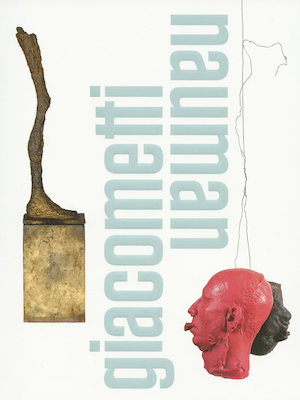 
Schirn Kunsthalle Frankfurt is dedicating a comprehensive exhibition to the surprising and hitherto largely overlooked connections in the work by Alberto Giacometti (1901-1966) and Bruce Nauman (°1941). Drawings, photographs, videos, sculptures and large-scale installations by the US multimedia artist will enter into an exciting dialogue with selected sculptures and paintings by the Swiss sculptor. Both artists' oeuvre revolves primarily around the image of man and the human condition; with reduced means of representation, they're both looking to explore fundamental existential questions. The shattering directness of the works of art presents the viewer with a lasting challenge. Giacometti and Nauman share a procedural approach as well as subjects, such as the representation of emptiness, the relationship between figure and space, and the fragmented body. In a thematically landscaped layout, the exhibition brings together about 70 works, including numerous major works by both artists.
The outcome of this juxtaposition is by no means foregone: Giacometti emerges as a pioneer of key developments in art after 1960, regaining his original radicalism, while Nauman's outstanding importance as a sculptor becomes apparent, achieving an alternative historical significance. The exhibition does not endeavor to confirm or even endorse influences and overarching theories, but rather expands our perception of the work of two outstanding representatives of 20th and 21st century art.