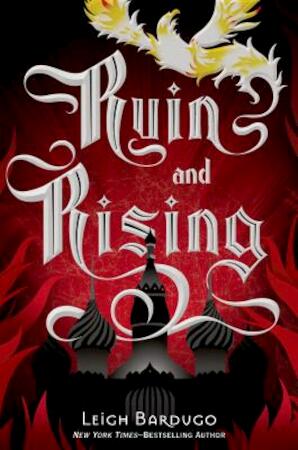 See the Grishaverse come to life on screen with Shadow and Bone, now a Netflix original series.

Enter the Grishaverse with Book Three of the Shadow and Bone Trilogy by the #1 New York Times-bestselling author of Six of Crows and Crooked Kingdom.

Soldier. Summoner. Saint.The nation's fate rests with a broken Sun Summoner, a disgraced tracker, and the shattered remnants of a once-great magical army.

The Darkling rules from his shadow throne while a weakened Alina Starkov recovers from their battle under the dubious protection of the zealots who worship her as a Saint. Now her hopes lie with the magic of a long-vanished ancient creature and the chance that an outlaw prince still survives.

As her allies and enemies race toward war, only Alina stands between her country and a rising tide of darkness that could destroy the world. To win this fight, she must seize a legend's power-but claiming the firebird may be her ruin.

Read all the books in the Grishaverse!

The Language of Thorns: Midnight Tales and Dangerous Magic
The Severed Moon: A Year-Long Journal of Magic

Praise for the Grishaverse

"A master of fantasy." -The Huffington Post
"Utterly, extremely bewitching." -The Guardian
"This is what fantasy is for." -The New York Times Book Review
"[A] world that feels real enough to have its own passport stamp." -NPR
"The darker it gets for the good guys, the better." -Entertainment Weekly
"Sultry, sweeping and picturesque. . . . Impossible to put down." -USA Today
"There's a level of emotional and historical sophistication within Bardugo's original epic fantasy that sets it apart." -Vanity Fair
"Unlike anything I've ever read." -Veronica Roth, bestselling author of Divergent
"Bardugo crafts a first-rate adventure, a poignant romance, and an intriguing mystery!" -Rick Riordan, bestselling author of the Percy Jackson series