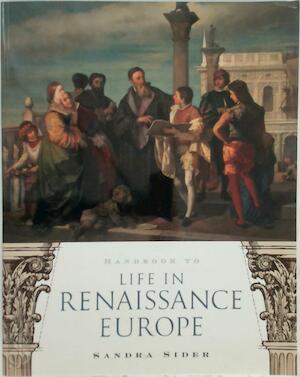 Handbook to Life in Renaissance Europe

The word renaissance means "rebirth," and the most obvious example of this phenomenon was the regeneration of Europe's classical Roman roots. The Renaissance began in northern Italy in the late 14th century and culminated in England in the early 17th century. Emphasis on the dignity of man (though not of woman) and on human potential distinguished the Renaissance from the previous Middle Ages. In poetry and literature, individual thought and action were prevalent,
while depictions of the human form became a touchstone of Renaissance art. In science and medicine the macrocosm and microcosm of the human condition inspired remarkable strides in research and discovery, and the Earth itself was explored, situating Europeans within a wider realm of possibilities.
Organized thematically, the Handbook to Life in Renaissance Europe covers all aspects of life in Renaissance Europe: History; religion; art and visual culture; architecture; literature and language; music; warfare; commerce; exploration and travel; science and medicine; education; daily life.