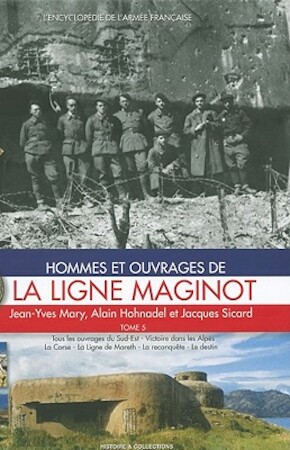 In the first part of this fifth volume, the authors give the complete order of battle for the fortified sectors of the Alpes (Rhone, Savoie, Dauphine and Alpes-Maritimes with the plans of all the fortifications) as at 10 June 1940. There follows an account of the fighting which saw the failure of the Italian offensive and the victory of the Army of the Alps in 1940, followed by the final part of the study of the troops, with the South-Eastern fortress engineers, the train and the services. The Mediterranean is then studied presenting two less familiar subjects: the fortifications built in Corsica and in Tunisia (the Mareth Line) with their respective troops. Finally, returning to the Continent with the use the Germans made of the North-Eastern Maginot Line and the fate of the fortifications (North-East and South-East) during the fight for French Liberation in 1944-45. The last chapter deals with how the fortifications were used within the NATO context and concludes this great saga about the most important line of fortifications built by France in the course of her history.