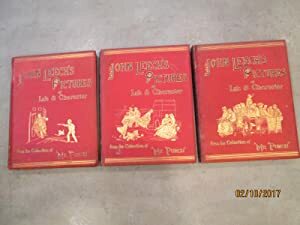 "John Leech was born in London. His father, a native of Ireland, was the landlord of the London Coffee House on Ludgate Hill, "a man", on the testimony of those who knew him, "of fine culture, a profound Shakespearian, and a thorough gentleman." His mother was descended from the family of Richard Bentley. It was from his father that Leech inherited his skill with the pencil, which he began to use at a very early age. When he was only three, he was discovered by John Flaxman, who was visiting, seated on his mother's knee, drawing with much gravity. The sculptor admired his sketch, adding, "Do not let him be cramped with lessons in drawing; let his genius follow its own bent; he will astonish the world" - advice which was followed. A mail-coach, done when he was six years old, is already full of surprising vigour and variety in its galloping horses. Leech was educated at Charterhouse School, where William Makepeace Thackeray, his lifelong friend, was a fellow pupil, and at sixteen he began to study for the medical profession at St Bartholomew's Hospital, where he won praise for the accuracy and beauty of his anatomical drawings. He was then placed under a Mr Whittle, an eccentric practitioner, the original of "Rawkins" in Albert Smith's Adventures of Mr Ledbury, and afterwards under Dr John Cockle; but gradually he drifted into the artistic profession. His nickname also being "Blicky" stuck with him during his life, along with being famous." -- Wikipedia, viewed 26 March 2014.