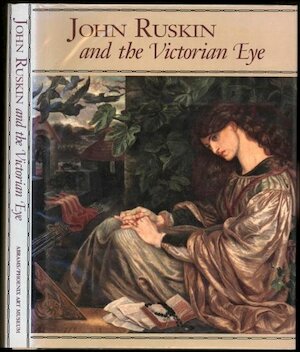 John Ruskin and the Victorian Eye

The six essays gathered in this book present an engaging look at the art and ideas of Victorian art critic John Ruskin, considered by many to be the greatest tastemaker of his time. Ruskin first came to fame in the 1840s for his articulate, impassioned defense of the paintings of J. M. W. Turner; later he championed the efforts of Pre-Raphaelite artists such as Edward Burne-Jones, Dante Gabriel Rossetti, and Elizabeth Siddal. As a lecturer at the University of Oxford and founder of the Saint George's Museum in Sheffield, England, Ruskin strove to instill in his followers a respect for craftsmanship and reverence for historic monuments. He actively promoted art education for all classes of people and spoke out continually against the social ills of his day. Ruskin believed that an artist's true gift was the power to see and to communicate moral as well as physical realities, and that insistence on the "art of seeing" serves as a unifying thread throughout the essays in this book, each of which addresses a different aspect of the critic's art and thought. Robert Hewison, a Ruskin scholar and theater critic for the London Sunday Times, recounts pivotal moments in Ruskin's life that were motivated by his encounters with Renaissance artworks. George P. Landow, Professor of English and Art at Brown University, discusses Ruskin's writing style, describing his "word paintings" and the evangelical prose with which he urged his readers to develop their own perceptive abilities. As a former art dealer and expert in British Victorian art, Christopher Newall brings special insight into Ruskin's own distinctive drawings. Susan Phelps Gordon, Curator of European Art at the Phoenix Art Museum, relatesRuskin's critical reaction to the art of his time, including the infamous Whistler vs. Ruskin libel trial of 1878 as well as Ruskin's relationships with and aspirations for the artists he supported. Anthony Lacy Gully, Associate Professor of Art History at Arizona State University, explores Ruskin's fascination with the natural world and his clashes with the scientific community. Susan P. Casteras, Curator of Paintings at the Yale Center for British Art and a lecturer in art history at Yale College, looks at Ruskin's theories on museums and their installations as he applied them in his Saint George's Museum, which he founded for the education of the miners of Sheffield. Complementing the essays are 179 beautiful illustrations - 40 in color - of works by Turner, Burne-Jones, Rossetti, Siddal, John Everett Millais, James Tissot, and many other artists; also included are a number of watercolors and drawings by Ruskin himself. A chronology of Ruskin's life, a bibliography, and an index round out this fascinating and very readable volume, which should remain a valuable resource for art lovers, Ruskin scholars, and Victoriana enthusiasts for many years to come.