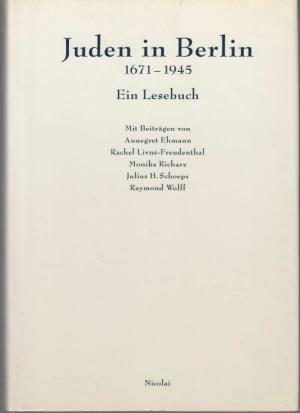 "Berlin was for centuries the center of Jewish life in Germany. Settlement, pogroms, trials against Jews, burnings at the stake and expulsion characterized its history from the fourteenth to the sixteenth centuries. Only after the Thirty Years' War did a new era begin. The eighteenth-century Berlin of Moses Mendelssohn was a city of Jewish emancipation and simultaneously a center of enlightenment. In this period and the generations that followed, Jewish Berliners and immigrants made important contributions to the city's economy. Jewish citizens strongly influenced the natural sciences and the city's cultural and literary life. Economic crisis and factors like inflation after World War I made an aggressive form of anti-Semitism possible, one that ultimately led to the death camps of the Holocaust. The last chapter of this illustrated book reports on new beginnings in the post-Shoah age." "This book is intended for everybody. Jews can reread their own history and better understand it. Non Jews can take up the book to realize that Jewish history is an important part of their own. Whether or not Berlin's Jewish past can be revitalized remains to be seen. The question of whether or not Berlin will ever again have a vibrant Jewish life - as it had before 1933 - is also open. Surely, the answer to whether or not this life will be integrated into the life of the city does not lie solely in the hands of its Jews. It depends on society as a whole."--BOOK JACKET.