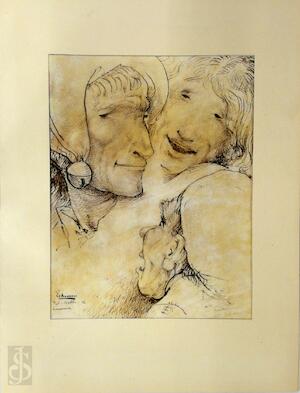 A unique copy, with numerous bibliophile extras, among which an original pen-and-ink drawing on vellum. The edition consisted of 335 copies, with 'quelques exemplaires nominatifs', of which the present copy is one. It was printed for Jean-Pierre Pottier (who himself was the printer of the text for this edition), and has a signed dedication by Eekmans to Marcelle Pottier on the half-title. Aside from the etchings (all with monogram in pencil) within the text, a separate folder contains two extra suites of the plates, one on Japon Imperial, the other on vergé pur chiffon. Folder is signed in full by Eekman.
Printed by Imprimerie Union in an edition of 335 copies. The etchings were printed in the workshops of R. Haazen. [Ref: Monod 3189].

A fine and unique copy, with numerous bibliophile extras, among which an original pen-and-ink drawing on vellum and two extra suites of the etchings. All etchings signed [E).