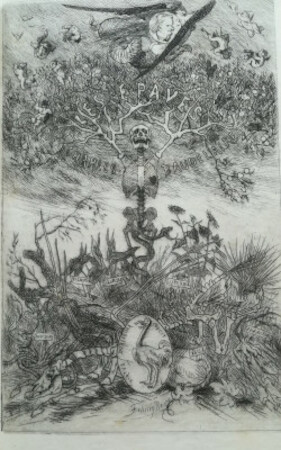 First edition of 17 poems by Baudelaire. 8vo,
One of 250 numbered copies on Holland, only edition except for 10 copies printed on China. Complete with the famous engraved frontispiece by Félicien Rops.
# Published in February 1866. It is the last book overseen by Baudelaire himself, who suffered a debilitating stroke in March 1866 and died the following year back in Paris. The collection contains 17 unpublished poems to which are added the 6 ‘pièces condamnées tirées des Fleurs du mal’. The whole is accompanied by Baudelaire's notes. Preface (‘Avertissement’) and explanation of the frontispiece by Poulet-Malassis.