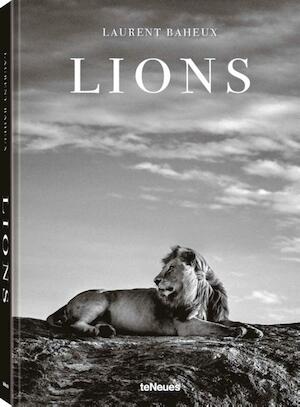 The French photographer Laurent Baheux dedicates his new book to the “King of the Animals”—the lion. Breathtaking black-and-white images create a powerful portrait of one of the most majestic and endangered species in the world. Think of lions and one might think of the powerful member of the “Big Five,” with a roar that echoes across the planes, and a merciless pursuit of its prey. One might think of the pack animal, surprisingly playful and affectionate within its pride. Or one might think of the endangered lion—long the target of hunters and trophy collectors. In this new photo book, Laurent Baheux journeys across Africa to capture the lion in all its intricate facets. The result is a sensitive and intimate photo portrait that shows the big cat in all its nuance: at once powerful, fragile, and tender. Baheux’s stunning black-and-white lion photographs show this feline animal with the precision and texture of a studio portrait—its many different movements, postures, behaviors, and expressions captured with startling intimacy. Playing among the pride, out hunting its prey, or eyeing us directly from the page, Baheux’s lion photography is as much a tribute to the lion’s character, power, and feeling as it is a haunting reminder that this most impressive of animals is also among the most endangered wildlife on earth. For over 15 years, Laurent Baheux has been creating a collection of monochrome wildlife photographs, characterized by a contrasting, condensed style. With a unique approach that overrides the laws of nature photography, Baheux seeks to capture the character of each animal as an individual. He is actively involved with environmental organizations, including the World Wildlife Fund (WWF) and the Jane Goodall Institute. In 2013, he served as a goodwill ambassador for the United Nations Environment Program (UNEP) in the Wild & Precious campaign against poaching. His photographs are shown in galleries and exhibitions in his native France and abroad and are the subject of numerous books and publications.