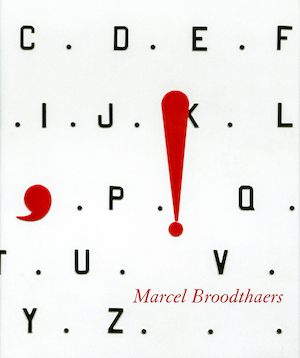 Marcel Broodthaers filled his brief, 12-year artistic career with more ideas and works than most artists manage in a lifetime. This career began in 1964, following a period of more than two decades laboring in some obscurity as a poet in the Belgian Surrealist circle of René Magritte (a crucial mentor for Broodthaers) and Paul Nougé. He also wrote articles on art during these years, including early critiques of Pop art. Broodthaers' first exhibition, held that year in Brussels, was accompanied by a now-famous announcement: "I, too, asked myself if I could not sell something and succeed in life. I had for quite a while been good for nothing … Finally the idea of inventing something insincere came to me and I got to work immediately." Traversing media freely-from installation and sculpture to artist's books, prints, film and writings-Broodthaers embodied the 'post-media artist' for whom any form could be recruited in the service of a larger conception. Those conceptions included institutional critique (of which he is a pioneer), art-historical critique, pastiche and philosophical-linguistic puzzles. Edited by Broodthaers' daughter Marie-Puck, featuring new scholarship by Wilfried Dickhoff and Bernard Marcadé, and with a range of both classic and never-before-seen works, this handsome book is the largest and most authoritative Broodthaers monograph ever published. As such, it is the first substantial overview in nearly 25 years. It includes a biography, exhibition chronology and a selected bibliography of publications. Marcel Broodthaers was born in Belgium in 1924. From the late 1940s to the early 1960s he worked primarily as a poet, and was a member of the Belgian Groupe Surréaliste-revolutionnaire. After almost two decades of poverty, Broodthaers performed a symbolic burial of his career as a poet by embedding 50 copies of his poetry collection Pense-Bête in plaster. Broodthaers died in 1976, on his fifty-second birthday, and is buried in Brussels beneath a tomb of his own design that features images from his allegorical repertoire, including a pipe, a wine bottle and a parrot. An important collection of his work can be seen at The Museum of Modern Art, New York.