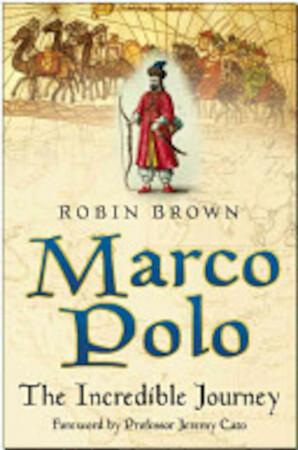 Marco Polo is the greatest explorer the world has ever seen, yet on his deathbed in 1324 he declared: 'I have not told the half of those things that I saw.' As a youth of seventeen, Marco began his epic journey through Armenia, Arabia, India and China. Yet for centuries many scholars simply did not believe his incredible stories. In this book, Robin Brown rescues Marco Polo from the lampooned clown figure he became, and reveals the utter uniqueness of his daring adventures.

Born in Venice in 1254, Marco began his travels when his explorer father took him off into the great unknown 'East'. Some twenty years later, Marco returned to Venice filled with tales of the wonders he had seen: black stones which burned with a bright flame, coconuts, paper currency and crocodiles. While imprisoned in a Genoa jail he composed a book of his adventures, A Description of the World, with fellow prisoner, Rusticello. The work earned Marco Polo the title 'The Father of Geography' and Christopher Columbus even took a copy of it on his voyage to the new world. But it also generated much controversy and, to many, Marco became known as Marco of the Millions - a teller of a million tall tales.

Marco's manuscript has long since disappeared and it is from copies and translations that we can learn of his time as the ambassador of the ruthless dictator Kublai Khan, his travels to Vietnam, Java, India and Arabia, and his exploration of China. But did this intrepid Venetian really become the first European to cross the continent of Asia? Did he escape death by offering to deliver the Khan's daughter as a bride to the Caliph of Baghdad? Robin Brown examines the truth of Marco Polo's claims and gives us a wholly new view of the man who made history happen.