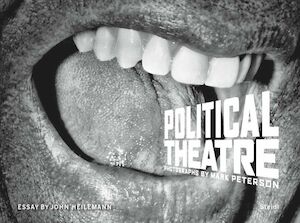 Over the past two years Mark Peterson has photographed American presidential candidates as they lead rallies, meet with voters and plead for votes. He started shortly before the government shutdown in 2013 at a Tea Party rally at the US Capitol, when politicians were railing against President Obama and the Affordable Care Act—a show to get a sound bite into the next news cycle. Since then Peterson has followed the political spin as it approaches the November 2016 election. Donald Trump’s entrance into the race—taking control of TV talking heads and making the media his press agent—is true political theatre. In a similar gesture, Bernie Sanders raised an arm in a power salute to waiting photographers after giving a speech in New Hampshire. Peterson pulls back the curtain on such performances to show these politicians as they really are. Although they are in plain sight, they hide behind words and carefully arranged imagery to project their vision of America. Peterson cuts through such staging and reveals the cold, naked ambition for power.