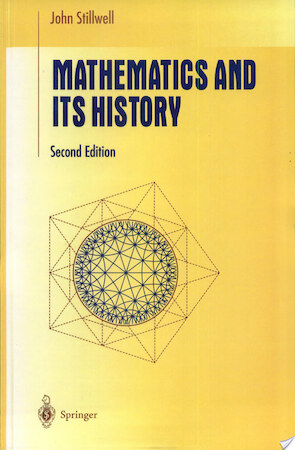 Mathematics and Its History

From the reviews of the first edition:
"[This book] can be described as a collection of critical historical essays dealing with a large variety of mathematical disciplines and issues, and intended for a broad audience¿ we know of no book on mathematics and its history that covers half as much nonstandard material. Even when dealing with standard material, Stillwell manages to dramatize it and to make it worth rethinking. In short, his book is a splendid addition to the genre of works that build royal roads to mathematical culture for the many." (Mathematical Intelligencer)
This second edition includes new chapters on Chinese and Indian number theory, on hypercomplex numbers, and on algebraic number theory. Many more exercises have been added, as well as commentary to the exercises explaining how they relate to the preceding section, and how they foreshadow later topics.