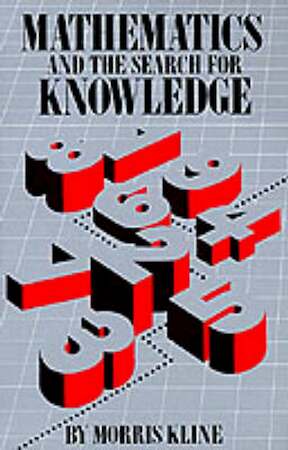 Mathematics and the Search for Knowledge

Mad River Road:After spending a year in prison, Ralph Fisher has explicit plans for his first night of freedom: tonight, someone will be held accountable. He goes to murderous lengths to obtain the address of his former wife - the woman he blames for his fate and against whom he has sworn vengeance. Determined to bring her to his idea of justice, Ralph's next step is to travel from Florida's sandy beaches to Dayton, Ohio, where his ex-wife is struggling to make ends meet on Mad River Road.Also in Florida, Jamie Kellogg wakes from an agonizing nightmare of her mother's funeral, and assesses her life: a pretty but unaccomplished twenty-nine-year-old woman in a dead-end job, with an ex-husband in Atlanta, a married lover in the hospital, and a virtual stranger in her bed. But this stranger is everything the previous men in her life weren't: tender, attentive, and adventurous. After convincing Jamie to quit her miserable job and ditch her judgmental, perfectionist sister, he proposes a romantic getaway. While Jamie wonders if this thrilling man might finally be her Prince Charming, they plan a road trip to visit his son, who lives with his mother on a street called Mad River Road...Heartstopper:Welcome to Torrance, Florida. Population: 4,160. As Sheriff John Weber would attest, the deadliest predators to date in his tiny hamlet were the alligators lurking in the nearby swamps. But that was before someone abducted and murdered a runaway teenage girl...and before the disappearance of popular and pretty Liana Martin. The pattern is chilling to Sandy Crosbie, the town's new high school English teacher. With a marriage on the rocks, thanks to her husband's online affairs, and a beautiful teenage daughter to protect, Sandy wishes she'd never come to the seemingly quiet town with shocking depths of scandal, sex, and brutality roiling beneath its surface. And as Sheriff Weber digs up more questions than answers in a dead-end investigation, one truth emerges: the prettiest ones are being targeted, the heartstoppers. And this killer intends to give them their due....Alternating between the chilling journal entries of a cold-blooded murderer and the sizzling scandals of small-town life, Heartstopper is Joy Fielding's most exciting novel of suspense yet.

"Mathematics and the Search for Knowledge" is ook verkrijgbaar als